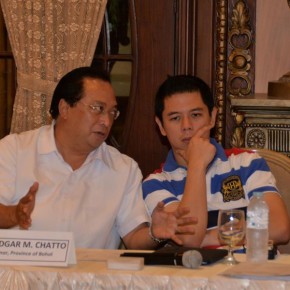 Keen investors, including foreign and multi-national, have been attracted to Bohol’s clear and aggressive energy development plan that in long term will address a major suppressant of growth—unreliable or lack of power.

The grand plan likewise gives premium to cheaper electricity as the province, in unison with the country, is heading for the ASEAN economic integration which greatest factor for being is competitiveness, according to Gov. Edgar Chatto.

Power developers, corporations and utility companies in the industry sent top officials or key representatives to the Power Investment Forum of the province thru the Bohol Energy Development Advisory Group (BEDAG) at Bohol Tropics on Tuesday.

The BEDAG, as a multi-sector group, is co-chaired by the governor and the secretary of the Department of Energy (DOE).

It presented in the forum the Bohol Island Power Development Plan (BIPDP), which seeks to ensure electricity supply, reliability and resiliency of supply, and affordability.

Chatto said the three focal goals should ensure that energy is available when needed, climate-proof and distributed to end-users at least cost.

Their presentation of business profile, credentials, records, technologies, and even assertions of inclusive period from project implementation to start of operation, were in order according to their time of registration at the forum secretariat.

Chatto described BEDAG as “happy” with the diversified investment proposals, adding that there were being initially found to be “very viable.”   “Others are called to come in,” then governor said.

A number of investors got stunned by Bohol’s “clear direction,” citing that seldom a province does its own work of energy master planning which is normally handled by the DOE and National Grid Corporation of the Philippines (NGCP).

The United States Agency for International Development USAID) has technically aided the power development program, especially in the crafting of the plan by BEDAG and its technical working group.

Year 2013 was a turning point for Bohol, which was ravaged by the record magnitude 7.2 earthquake and affected by the overly super typhoon Yolanda.

The typhoon did not make landfall here, but it toppled transmission towers that connected Bohol, which own power facilities and lines already incurred heavy earthquake damages, to the main Visayas grid resulting in a month-long blackout province-wide.

The economic implications of such great disasters immediately moved the Bohol leadership to take decisive actions, including Chatto’s creation of BEDAG leading to the long-term energy plan with strong emphasis on generating power right on Bohol island.

In that earthquake year, Bohol island had a total demand of 76 megawatts (MW), approximately 87% of which was normally sourced outside via Leyte-Bohol transmission.

For updating, it considers future economic activities such as tourism growth and infrastructure development.

Bohol’s demand is expected to peak at 75MW in 2019 and 113MW by 2043, according to BEDAG-TWG using a rigorous forecast model formulation and testing for forecast validity and accuracy,

This year, the province’s baseload need is projected at 64MW, summing up the forecast 53MW baseload and 11MW peaking.

Planners noted that the apparent decrease in demand from 2013 (76MW) to 2015 could be attributed to the effects of the devastating earthquake.

Bohol’s forecast uncontracted demand in 2017, during which the Panglao airport shall have completed and operationalized as targeted, is at 26MW baseload, plus 12MW peaking.

The BEDAG also came up with an optimal power supply mix that, when implemented, will ensure the least-cost power supply.
For Bohol’s combined requirement, the optimal demand in megawatts should consist 82% baseload and 18% peaking power plants.

Practically all of its requirements shall be supplied from baseload plants and only 0.5% from peaking generators.

From these results, contracting for baseload plants should be a priority, according to the plan, and the small proportion of energy derived from peaking supply may come from WESM.

Concurrent with bilateral baseload supply contracting, the BEDAG will assess local resources and identify possible sources that can be tapped for power generation.

Increasing the supply sourced from within Bohol contributes to self-sufficiency and climate resiliency of Bohol’s power supply.

The BEDAG endorsed a transmission plan, which consists of an alternate Cebu-Bohol link to ensure connectivity of the province to the main Visayas grid.

This also allows the export of excess power from Bohol if more generating resources are developed within the island.

Chatto said the province is to release guidelines after the power development forum, reiterating that any investment decision has basis for environmental respect.

In the forum, one of the interested investors, the Sta. Clara International Corp., accepted the fact that its “failed” Cantakoy hydro-power plan did lack environmental assessment, among others, to be viable and feasible.

A modified proposal for the Cantakoy project, which has Ayala a partner-proponent, in Danao-Inabanga is set for a serious discussion with BEDAG.