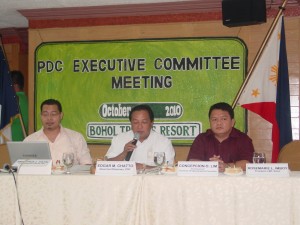 After the July 15th Full Council Meeting of the Provincial Development Council (PDC), Governor Edgar Chatto presided the first Executive Committee meeting of the PDC last October 6, 2010 at the Flamingo Room 2 of the Bohol Tropics Resort in Tagbilaran City.

Provincial Planning and Development Coordinator, Atty. John Titus Vistal, who also serves as Head of the PDC Secretariat, presented the Bohol Annual Investment Plan (AIP) for CY 2011 through a power point presentation.  He stressed that the total roads sector development funding for 2011 (including  the P48M from PRMF) is P131.5M.   The ExeCom then favorably endorsed the proposed 2011 AIP of the Provincial Government of Bohol to the Sangguniang Panlalawigan (SP), in the total amount of P1,215,205,518.00, particularly the programs and projects for funding under the 20% Development Fund (DF), in the amount of P211,275,103.66.   The motion came from the NIA Regional Manager, Engr. Modesto Membreve, and secondment from Mr. Panfilo Asares and Mr. Argeo Melisimo, both private sector representatives to the PDC.

The ExeCom also favorably endorsed to the SP the proposal to add the supplemental amount of P29,391,460.00 to the AIP of the Provincial Government of Bohol for CY 2010 after a brief explanation of  the Provincial Budget Officer, Ms. Valeria Orig.

The District Engineers of the Department of Public Works and Highways (DPWH) I, II and III then presented the priority programs and projects of their respective districts as well as the Medium Term Development Investment Program for 2011-2013.  Engr. Sari Mejias presented in behalf of Engr. Teodoro Castillo for District I while Engr. Godofredo Laga, Jr. represented Engr. Gregorio Sayson of District II based in Ubay, Bohol.  On the other hand, Engr. Edilberto Ativo of District 3 based in Guindulman, Bohol was represented by Engr. Teotimo Baghucan.

The PDC ExeCom passed a resolution strongly supporting the priority programs and projects of the three districts of DPWH in Bohol as well as the Medium Term Development Investment Program for 2011-2013.

Governor Chatto took the opportunity of thanking Engr. Membreve for providing the detailed map used for the October 1st Family Day where 4,000 seedlings were planted in Bayongan, San Miguel, Bohol.

Finally, the PDC ExeCom  passed a resolution approving the Bohol Provincial Development Investment Program (PDIP) which includes the structure, policies and prioritization criteria after the presentation of Atty. Vistal.  The resolution was sponsored by Board Member Abel Damalerio who represented Vice Governor Concepcion Lim in the PDC ExeCom.